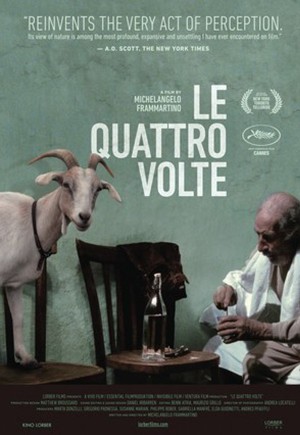 Director: Michelangelo Frammartino
Starring: Giuseppe Fuda, Bruno Timpano, Nazareno Timpano
Distributor: D FilmsWinner of the Europa Cinema Label/Best European Film at the 2010 Cannes Film Festival, Le Quattro Volte is inspired by Pythagoras's belief in four-fold transmigration - by which the soul is passed from human to animal to vegetable to mineral. Michelangelo Frammartino's extraordinary docu-essay traces the cycle of life through the daily rituals of life in the southern Italian region of Calabria.

"Its view of nature is among the most profound, expansive and unsettling I have ever encountered on film...Mr. Frammartino's eye for both comedy and mystery produces compositions that are so strange and memorable that they seem to reinvent the very act of perception." - A.O. Scott, The New York Times