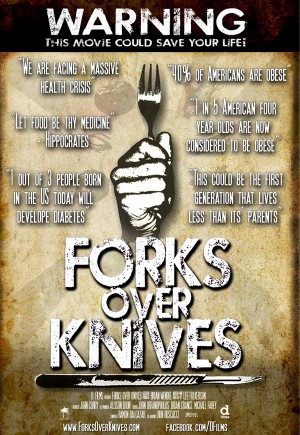 Director: Lee Fulkerson
Cast: T. Colin Campbell, Ph.D and Caldwell B. Esselstyn. Jr., M.D.Forks Over Knives examines the profound claim that most, if not all, of the so-called "diseases of affluence" that afflict us can be controlled, or even reversed, by rejecting our present menu of animal-based and processed foods. The major storyline in the film traces the personal journeys of a pair of pioneering yet under-appreciated researchers, Dr. T. Colin Campbell and Dr. Caldwell Esselstyn.

Dr. Campbell, a nutritional scientist at Cornell University, was concerned in the late 1960's with producing "high quality" animal protein to bring to the poor and malnourished areas of the third world. While in the Philippines, he made a life-changing discovery: the country's wealthier children, who were consuming relatively high amounts of animal-based foods, were much more likely to get liver cancer. Dr. Esselstyn, a top surgeon and head of the Breast Cancer Task Force at the world-renowned Cleveland Clinic, found that many of the diseases he routinely treated were virtually unknown in parts of the world where animal-based foods were rarely consumed.