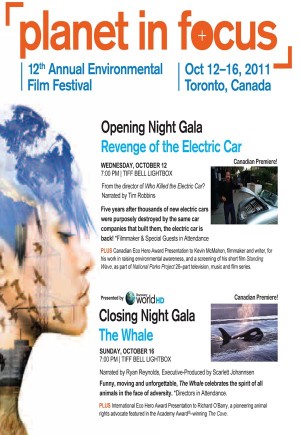 The 12th Annual Planet in Focus Environmental Film Festival, Canada's largest and longest running environmental film festival, kicked off its 2011 edition in Toronto with a big start and finish, with Opening and Closing Night Galas, Revenge of The Electric Car, narrated by Tim Robbins, and The Whale, narrated by Ryan Reynolds

The festival featured five days of galas, film screenings, panels and workshops, and shone a spotlight on the theme of landscapes, looking at contemporary filmmakers who are challenging and redefining our changing perceptions of landscape.

Planet in Focus is Canada's leading not-for-profit environmental media arts organization, producing year-round programming across Canada and around the world and fostering a new generation of environmental filmmakers.