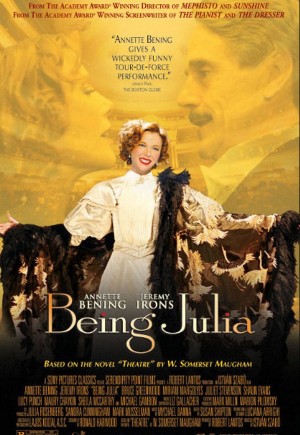 Director: István Szabó
Starring: Annette Bening, Jeremy Irons, Shaun Evans, Michael Gambon, Bruce Greenwood, Juliet Stevenson
Canadian Distributor: ThinkFilmAn intoxicating combination of wicked comedy and smart drama, Being Julia, directed by Istvan Szabo and produced by Robert Lantos, tells the story of a great actress who, at an important crossroads in her life, must figure out her role, both onstage and off. The film stars Annette Bening, who received a Golden Globe Award and an Academy Award nomination for her performance in the title role.

The screenplay by Ronald Harwood is based on the novel Theatre by W. Somerset Maugham. The original film score was composed by Mychael Danna.