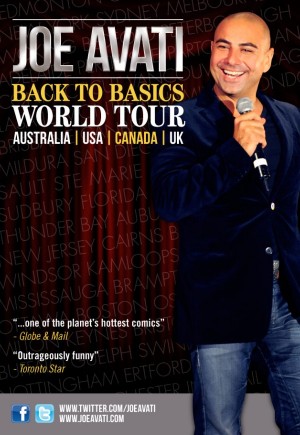 Comedy Superstar's 'Back To Basic Tour'

Australian-Italian comedy superstar Joe Avati kicked off his 'Back to Basics Tour' in Canada on September 22, 2012, stopping in 14 Canadian cities, including Toronto, Montreal, Vancouver, Calgary and Edmonton.

One of the biggest names in international comedy, Avati returned to Canada after a five-year absence. Avati still holds the record for the fastest-selling comedy show ever in Canada, selling 3200 tickets in just nine minutes at the Toronto Centre for the Arts.

Often referred to as the "Italian Jerry Seinfeld" for his observational style of humour that gently skewers his Italian-Australian upbringing, Avati has developed a massive cult following on both sides of the Atlantic, including the United Kingdom, the United States and Canada. In addition to delivering his unique brand of stand-up comedy (performing in both English and Italian) to full houses since 1995,
joeavati.com