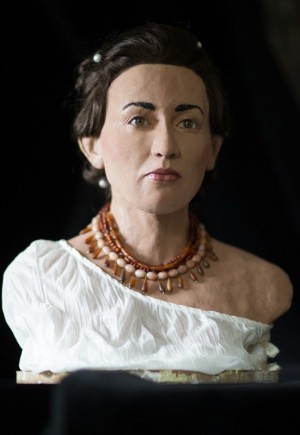 Executive Producer: Simcha Jacobovici
Producers: Kathryn Liptrott, Ric Esther Bienstock
Associate Producer: Felix Golubev
Host: David BermanWhat did the Biblical seductress Delilah really look like? Is it possible to see the face of a man who listened to Jesus' Sermon on the Mount? These are a few of the exciting mysteries revealed in a new four-part TV series, Biblical Forensics: Real Faces Of The Bible, from Toronto-based Associated Producers (The Lost Tomb of Jesus, The Naked Archaeologist, The Exodus Decoded). Having been granted unprecedented access to four ancient skulls from the Holy Land, each episode seeks to accurately reconstruct a "biblical" face for the first time ever.

Using a blend of myth-busting archaeology, dramatic recreations and 21st century forensic science, we see for the very first time the reconstructed face of a Philistine woman who lived at the time of Delilah, the biblical femme fatale who has inspired many a painter and Hollywood casting agent. We also see the reconstructed face of a sacrificial victim "brought to life" - a baby found in a millennia old Canaanite jar. The following episode unveils the face of a 6000 year-old man from pre-Canaanite times who was given a special burial in a remote desert cave. Finally, for the first time ever, viewers will have the very rare opportunity to see the reconstructed face of a Galilean man who lived in a region strongly associated with the ministry of Jesus, and was likely one of his followers.

Hosted by David Berman of the hit forensic drama series CSI: Crime Scene Investigation, Biblical Forensics takes viewers into an unforgettable journey of discovery to come face to face with four remarkable depictions of characters from the biblical era.