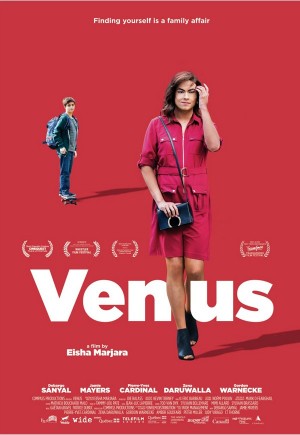 VENUS tells the tale of Sid (Debargo Sanyal), a South Asian transitioning woman whose life is turned upside down when Ralph (Jamie Mayers), the “white” 14 year-old biological son she never knew she had, shows up unexpectedly at her door. Shot in Montreal, the upbeat film also deals with the hardship of transition and how it affects family and friends. VENUS has won numerous awards on the international film circuit, including most recently two awards at the 2018 Kiel Transgender Film Festival in Germany for Best Trans Performance (Debargo Sanyal) and Best Actor non-trans role (Jamie Mayers), as well as Best Narrative Feature at the 2018 Cinequest Film Festival in San Jose.

Sid is under pressure to marry a nice Indian girl and raise a family. His East Indian mother (Vancouver’s Zeena Daruwalla) yearns to have grandchildren. Her dreams are about to come true, but not in the way she ever imagined. When Sid comes out as a woman, a 14 year old boy named Ralph shows up at her door announcing that Sid is his parent. Although surprised to discover that his biological dad is now a woman, Ralph thinks having a transgender parent is pretty cool. But he hasn't told his mother and stepfather that he’s tracked down his biological father. And then there is Sid’s boyfriend Daniel (Pierre-Yves Cardinal), who has yet to tell his family of his relationship with Sid. Daniel is nowhere near ready to accept Ralph as a stepson and complicate his life further. Sid's coming out creates a snowball effect that forces everyone out of the closet.