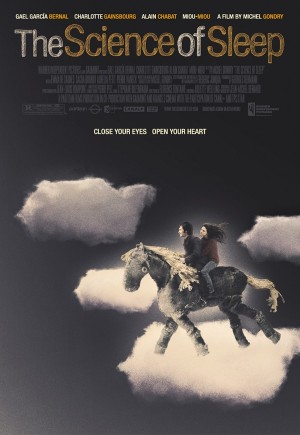 The Science Of Sleep

Director: Michel Gondry ("Eternal Sunshine of the Spotless Mind")
Starring: Gael Garcia Bernal, Charlotte Gainsbourg, Alain Chabat.
Distributor: Warner Independent PicturesIn director Michel Gondry's, The Science of Sleep, life seems to be looking up for shy and withdrawn Stephane (Gael Garcia Bernal) when he is coaxed to return to his childhood home with the promise of a job...in the mundane world of copy setting. Wildly creative, his fanciful and sometimes disturbing dream life constantly threatens to usurp his waking world. Stephane is quickly drawn to his neighbor, Stephanie (Charlotte Gainsbourg) whose imagination easily matches his own. As their relationship blossoms, the confidence Stephane exudes in his dreams begins bleeding over into his real life.

Unable to bear the prospect of a waking world without Stephanie's love, and with no satisfying solutions coming out of his dream world, Stephane faces a dilemma he may not be able to depend on the science of sleep to help him solve.